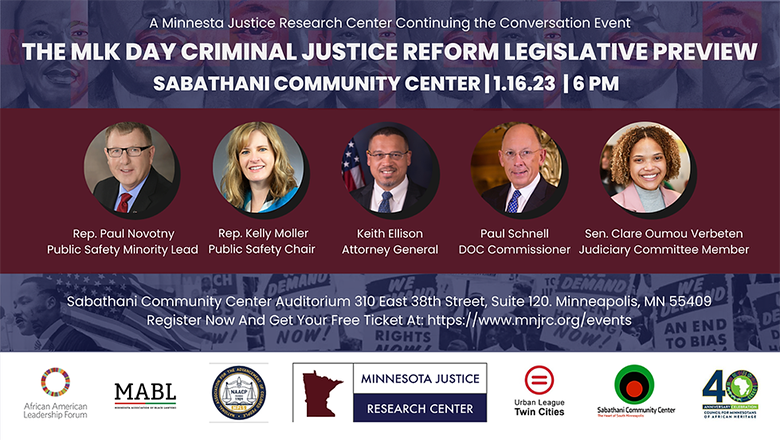 As we all know, Dr. Martin Luther King Jr. lived a life dedicated to fighting injustice. Of the many institutional injustices the Civil Rights Movement was dedicated to addressing, mass incarceration is one that persists to this day. With this event, we hope to honor his legacy by creating a space for state legislators to not only reflect on the problems and progress of the past but to commit to taking action in the future to transform the criminal legal system in the present.
In Minnesota, black community leaders have long requested action on criminal justice reform proposals. These calls were only heightened after the murder of George Floyd. For the past four years, however, the partisan divide at the legislature has stifled progress on a wide variety of high-profile criminal justice proposals however. After the recent election, the legislature is now under one-party control. One-party control means less partisan politicking over crime clogging up negotiations and, presumably, more cooperation between the MN House and Senate on criminal justice reform priorities. However, the extent to which one-party control will mean meaningful change in criminal justice reform is still unclear.
For this reason, the MNJRC has partnered with black-led organizations such as the Council for Minnesota of African Heritage, the African American Leadership Forum, the Twin Cities Urban League, the Minnesota Association of Black Lawyers, and the Minneapolis NAACP to offer a preview for Minnesotans who want to know what to expect from the legislative session and how to engage and support transformative changes to the criminal legal system.
For those interested in attending this free event, we ask that you register at https://www.mnjrc.org/events. We’re looking forward to spending time honoring the legacy of Dr. Martin Luther King Jr. with everyone!
Read more

A Message from President Redd